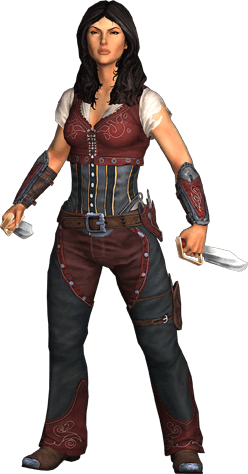 Rita is from out West. She grew up a sweet girl who dreamed of a bright future. That changed when her family was traveling up from Mexico and was ambushed by bandits. They wanted more than her life and she was determined not to give it to them.

Rita was the sole survivor and it changed her. When she was discovered they found her surrounded by bodies with a knife in her hand and covered with blood. Since then she has set out to protect anyone weaker who is preyed upon by others.

Rita honed her skill with a knife until it reached legendary proportions; she’s faster on the draw with her blades than the quickest gunslingers and has the heart of a wildcat in battle. Her travels have drawn her to the East, far from the deserts she called home.

Rita trusts no one, it’ll take a bold act to win her friendship.