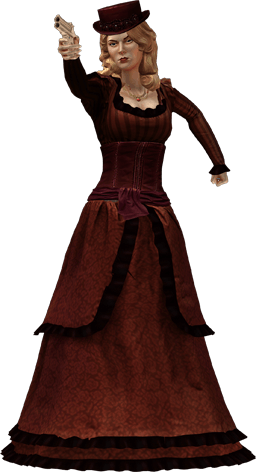 Jane grew up early, life threw everything they had against her and she’s survived it all. She’s a former prostitute and makes no apologies for it. Though she met some bad people along the way she never regretted her decision.

A few years back Jane tried to have a normal life. She retired from the business and found, what she though was, a good man to settle down with and have a proper family. What she didn’t count on was his normal outward self was a cover for a cruel, dark minded man. Shortly after the birth of their daughter he began to take his frustrations out on Jane.

Jane had never been weak and tried to fight back. One evening when he came for her they struggled. A lantern fell in the struggle and set their small home ablaze. She could hear her daughter crying as the roof fell in. Insane with rage she kicked her husband into the flames and watched as her home, her life and her dreams burned down in front of her.

Jane hit the road after her wounds had time to heal. Despite everything that has happened she’s determined to find some good in the world. Her rough lifestyle has taught her how to use her gun and her physical charms to her advantage. Jane is as smart and crafty as they come.Jane Dixon