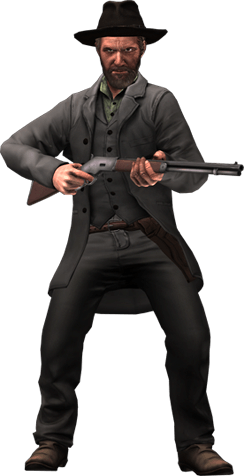 Devil Anse Hatfield is the patriarch of the Hatfield family and one half the picture of the classic, legendary feud. He was a Confederate fighter who fought with a local militia unit he named the Logan Wildcats.

He returned from the war to his homestead near the Tug Fork River, which borders Kentucky and West Virginia. Along with his military exploits Devil also owns a large amount of timber and farmland which he has steadily been expanding.

Devil is a fierce warrior and has tons of real world experience in battle. With the family his word is law and he rarely changes and opinion once it settles in. Devil loves his family and will protect them no matter the cost. He believes the McCoys have wronged him on multiple occasions and simply can’t let it go uncontested.